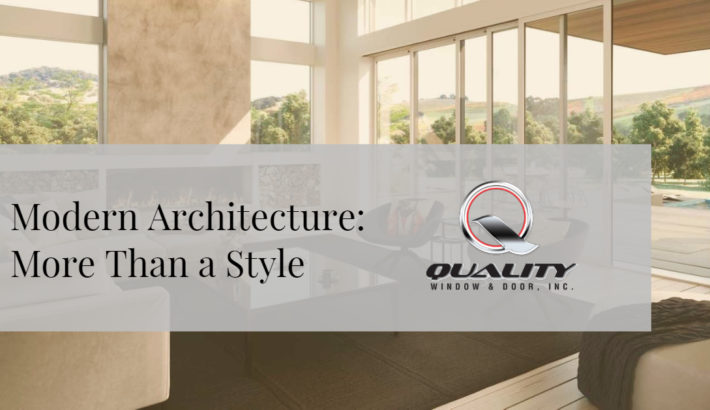 Modern Architecture: More Than a Style

Modern is about more than just clean lines and cubic shapes – it’s about an approach that puts purpose above pretty.

Mies van der Rohe’s famous aphorism “Less is more” spoke to his efforts to distill buildings to their core elements and move away from ornamentation for its own sake — a key principle of modernism. Those practicing a modern approach forged a deeper connection with nature, the surrounding environment, and each other; using local and natural materials whenever possible.

In recent years, modern architecture has continued to have a profound effect on the way buildings are designed and how their inhabitants expect to experience them.

Most people have an idea of what modern architecture looks like, even if they can’t quite define it: Large windows. High ceilings. Linear elements. Lots of natural light. Stripped down interiors. Structural elements, such as concrete or beams, often left exposed.

The words “modern” and “contemporary” are often used interchangeably, but they’re actually very different. “Contemporary” refers to the current time period, not a style. That means that even a building with the grand arches or domes that we associate with ancient monuments was considered contemporary when it was first built. On the other hand, “modern” refers to a particular philosophy, not a time period. It often manifests in a certain look, but more importantly, modern design always follows certain underlying design principles. To have a modern building, its elements must exist for a purposeful reason, not purely for aesthetics

“Modern is a more honest look at what a building is—load-bearing columns, beams that transfer the weight, and not putting things in for decoration. It’s still beautiful, but there’s kind of a level of honesty and simplicity in the design.”- Rebecca Comeaux, AIA, LEED AP, Associate at Lake | Flato Architects.

We think we know a modern building when we see it, but do we? Chicago-based architect Scott Rappe, AIA, LEED AP at Kuklinski + Rappe Architects says we may be conflating two very different concepts. “Be careful of thinking of modernism as a style,” he says. “It’s really a philosophy—a design approach. Every building that looks modern is not necessarily modern if it’s just stylistic.”

A building can have distinctive features of modern design, like large windows and high ceilings or a flat roof and cubic shapes, without embracing the principles of modernism in the design approach. Modernism is a design language that focuses on rethinking the way humans live in and use the designed environment around them. It’s about experimentation, technical innovation and the thoughtful use of materials.

The design process and thoughtful approach that characterizes modern philosophy can be tracked back thousands of years. For example, 1,000-year-old European cathedrals with high ceilings, vast expanses of space, and great height. Builders of those cathedrals stripped away the expectations of what a church should look like to take advantage of technologies that were new at the time.

“The hallmark of modernism is that ability to look forward, to take advantage of what technologies you have and to sort of put up with the potential social ramifications of moving away from what people consider appropriate or traditional,” said Rappe.

The origins of a new product line

In this sense, Marvin’s new Modern product line embodies modern principles by incorporating innovations in technology that look ahead. When we decided to create a new product line, we applied the same rigorous research, attention to detail, and focus on innovation that made our previous product offerings so successful, but we didn’t rely on how we’ve always done things.

“The Modern line encompasses the intricacies of modern design principles, from the minimalist profiles to the symmetry of the product line and how it flows together as a system of windows and doors,” said Brenda Brunk, senior product manager at Marvin Windows and Doors.

The Marvin Modern product line features a High-Density Fiberglass exterior, a revolutionary material that echoes the sleek and simple look of other modern materials but provides improved thermal efficiency. Thanks to this new material and a proprietary frame design, Marvin has a higher thermal performing product than most competitors.

The frame requires no additional material to aid in its thermal performance—a departure from thermally broken competitors and indicative of the modernist philosophy that resists doing things as they have always been done. It also features an integrated mull channel that enables mull reinforcement while maintaining sightlines and preserving thermal efficiency. These enhancements reimagine how windows and doors can perform.

Marvin Modern doesn’t just embrace modern philosophy in its approach, it embodies the physical attributes that modern architects and builders strive for. Narrow sightlines of less than 3” are consistent across all products, meaning that even when individual panes are mulled together to create a large window wall, the minimal visual disturbance is upheld, offering a more open view to the outdoors.

Modern architects design to connect with nature, and consistent sightlines help to seamlessly connect interior and exterior spaces, while providing minimal interruption of a view.

A strong foundation of modern principles allows for new innovations
Ultimately, the introduction of Marvin Modern creates an exciting new opportunity for architects and builders that focus on modern design. “This project has allowed our team to consider what’s possible and truly exercise design thinking to arrive at solutions based on the needs and desires of our current and future customers,” said Brunk. “These products are a result of high engagement and customer centricity at the core.”

The twentieth century marked a time of profound design changes, during which architectural pioneers defined a new movement. Now that these leaders have established the principles, today’s architects have room to explore modern architecture with their own interpretations and look to the future of modern design.