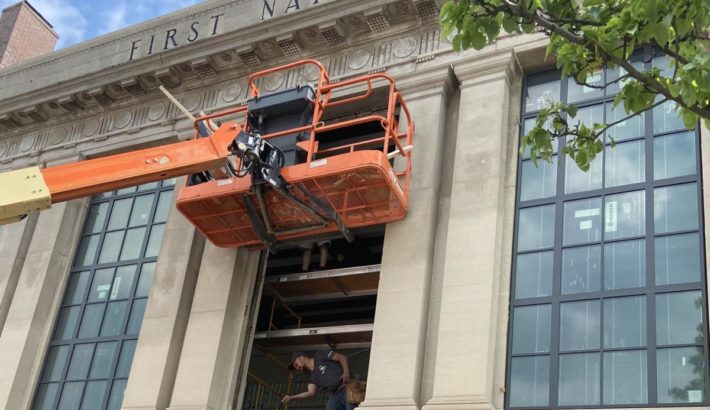 We installed new Marvin windows last month in the former First National Bank of Angola Building. The windows turned out beautiful and the Angola Historic Preservation was pleased with the outcome.

ANGOLA — A second set of replacement windows to be installed at the former First National Bank of Angola building on the Public Square started going in on Monday afternoon and appear to be complete, minus some trim.

The work comes months after a lawsuit ordered removal of the first set of replacement windows then the February approval by the Angola Historic Preservation Commission of a new set of windows was approved.

“The HPC is very pleased with how this situation turned out. The company that owns the bank building went from willfully ignoring the City of Angola’s laws regarding historic preservation to being quite cooperative, even making changes HPC didn’t ask for. It was a refreshing change of attitude,” said Lee Sauer, president of the Historic Preservation Commission.

Thomas Blake, owner of 15 S. Public Square, was granted a certificate of appropriateness in February, which allowed him to move forward with installing the new windows, bringing him into compliance with a Steuben Circuit Court order.

Once completely renovated, the former bank building will be headquarters for two of Blake’s businesses, Our Country Home and EnTrust Capital Management. Interior work is expected to be completed next month, a company spokesman said.

Blake was ordered by Judge Allen Wheat in December to work with the HPC to reach an agreement on replacing the building’s south and north side windows after he defied the body by removing the original windows and installing new ones without first securing a required certificate of appropriateness.

Designs for the new second-story windows to be installed at the former First National Bank building received unanimous approval from the body’s members.

The first set of new windows, though they had grids encased in the glass that replicated the original windows, did not have exterior grids.

Deb Parcell of Indiana Landmarks, who consults for the Historic Preservation Commission, said the new windows detracted from the vertical nature of the original window units. She said it diminished the building’s historical significance to the historic district.

The new windows that the HPC approved are fiberglass in a gunmetal color made by Minnesota-based Marvin Windows and Doors. In February, Parcell said both the design and color will closely mimic the building’s original windows.

A set of smaller windows that run along the lower portion of the north side of the building, which matched the large windows that were removed, remain. They were granted approval by the Historic Preservation Commission last summer.

Blake has been accruing fines of $150 per day until a resolution can be found. The fine ran from Dec. 3 until Feb. 10, after which point if there was no resolution, they could double to $300 per day.

During the February meeting, City Attorney Kim Shoup said a successful resolution to the window issue could result in the city requesting Wheat to waive the fines. Shoup said the city was interested in getting the appropriate windows installed, not collecting fines.

Through Wednesday, the fines could have totaled nearly $42,000.

“We realize some folks don’t like government involvement in situations like this, but Angola’s history is owned by all its citizens. Our beautiful downtown reflects that history and our community is rightfully proud of it. No one business or individual should be able to take away any part of our heritage. Those buildings have been passed down to our generation, and we need to protect them for future generations,” Sauer said. “Personally, I feel downtown is entering a golden age. Rather than taking away from Angola’s historic character, the renovations done recently have brought that character back to life.”

When provided the opportunity to respond to Sauer’s comments, the company issued a blank “no comment.”